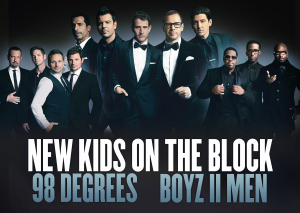 New Kids On The Block, Boyz II Men And 98 Degrees, “The Package Tour”

Through the years as we continue to interview different Pop stars in the music biz, we have learned that with every new interview we get to conduct comes a new story to tell. Some of these stories are better than others, because let’s be honest, sometimes depending on who we are interviewing and why, it was just another day at the office. The special productions would not be special if they happened everyday right? As loyal readers of Clizbeats.com know, every once and a while we are able to interview someone who goes on to play a part in our site’s history, as that person leaves a significant impact on us not only professionally, but personally as well! Our recent feature interview with Jordan Knight of New Kids On The Block is without a doubt one of the projects that will always be remembered as a personal milestone in Clizbeats history.

Like many people born in the 1980s, we were raised with NKOTB in our consciousness. At the time we were too young to really understand every detail about what made the New Kids stand out, but in 1990 it was impossible to escape “Step By Step” on the radio. These guys even had a Saturday morning cartoon show that aired on ABC from 1990-1991. We have memories of kids playing different New Kids cassette audio tapes around school, but our personal connection with NKOTB, and more specifically, Jordan Knight would not come until years later.

We became more familiar with New Kids’ legacy retrospectively in the late 90s when both NKOTB members Jordan Knight and Joey McIntyre released their debut solo albums. Joey’s Stay The Same was originally released on BNA Records in 1998, then re-released by C2/Columbia Records/WORK GROUP in 1999, while Jordan’s  Jordan Knight came out on Interscope Records in 1999.

Knight, NKOTB’s one time lead vocalist, became known as a soulful solo star who opened up for a new boy band called *NSYNC, as his solo debut went platinum, driven by the top 10 hit, “Give It To You.” That album’s music would prove to have a greater effect on our career after we were introduced to the music and production of Grammy Award winning singer/song writer/producer, Robin Thicke. As we began learning more about Robin’s work, we discovered that much of his early songwriting and production work was on Knight’s solo debut! When Robin was 17, he served as a primary co-writer and producer on the majority of that album, along with Jimmy Jam & Terry Lewis. In 2005, when we launched Clizbeats.com, one of our very first articles was about how Robin Thicke was going to be signing with Pharrell Williams’ Star Trak Records to release his second album.

Knowing Robin’s early work also later came in handy a few months later when we recorded our first phone interview with him from our Temple University dorm room in April of 2006. At the time Robin was still a developing presence in the media, and even though he was a credible song writer, he was still green to doing detailed interviews about his life. it is probably safe to say that he was a nervous as we were at the time. However, it was cool to see how he became more comfortable with the conversation after we spent time discussing his work on the “Jordan Knight” album. By showing our understanding of Robin’s unique relationship to that project, it allowed him to open up more about his own work later in the discussion, which made everything better for the interview, and helped it stand out among his many other later  interviews.

All of this would come full circle for us later after we got the opportunity to interview Nick Carter from the Backstreet Boys. That summer Nick and the other Boys invited us out to their, NKOTBSB show with New Kids On The Block, and the whole thing became an unforgettable experience. That was also our first opportunity to see all of what New Kids had to offer as the veteran Pop stars that they are! After taking it all in, and combining it with what we had learned about them  in the past, we knew interviewing them would be a great opportunity if ever given the chance! Well, to make a long story short, that chance came when the guys promoted their latest album 10, right before their recent summer tour. Not only did we get to talk to one of the members of NKOTB, but it was Jordan Knight, the guy we felt connected to via Robin Thicke so many years before. We got to tell him about seeing his group perform with the Backstreet Boys, and he also got a real kick out of hearing our Robin story off the record. We really believe that just like when our enthusiasm helped open Robin up back in 2006, Jordan also became very comfortable with going into detail with us because of the stories we shared with him! As a result we believe it turned out to be one of our best projects. It is fun, detailed and tells the story of New Kids On The Block in a very unique way.

You can check out the feature interview with Jordan Knight of New Kids On The Block by clicking below!! But before you do that, you may want to check out this cool Clizbeats/All Access Exclusive from that project. It is an extended part of the conversation where Jordan goes into more detail about how NKOTBSB helped inspire their latest venture with Boyz II Men and 98 Degrees, The Package Tour! We are very proud of it, and encourage you to check it out! Take a listen to it all, and always keep checking back for more Clizbeats/All Access Exclusives!!

CLIZBEATS/ALL ACCESS PREVIEW OF “JORDAN KNIGHT FACES THE MUSIC OF NEW KIDS ON THE BLOCK: THE STORY OF THE FIRST BOY BAND “