10 Questions with Swedish band, Little Great Things, Including Their Connection To ABBA! 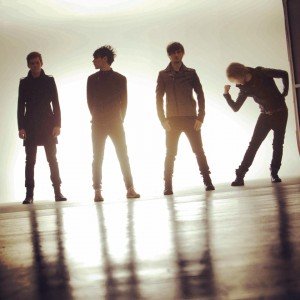 LITTLE GREAT THINGS is a multi-talented Pop/Rock crossover unit from Stockholm, formed in 2009. Brothers, Charlie (vocals & guitar) and Felix Grönvall (drums,percussion)) have been playing together ever since the day they picked up their instruments. Music is certainly in their blood as their grandfather is Benny Andersson of ABBA, that certainly needs no further introduction

When Charlie, as a teenager, began studying music at the Rytmus (famous Swedish music school), he got to know Adam (piano/&keys) and Cristoffer Wernqvist, (bass). But it was not until he and the guys on the day after having graduated – decided to play together. A substantial process took shape and that in turn led to smaller venues in Stockholm. It was hard work with an evident target.

In the year 2013, LITTLE GREAT THINGS started to deliver tracks that came to develop the sound that today is significant for the band. 2013 was also the year when the band decided commence the recording of their debut-album.

It was also in 2013 the band was signed up with its current manager, Jens Lundberg, at Blue Lemon Management.. One target/strategy for the band is to reach out internationally. LITTLE GREAT THINGS has discretely been introduced to music business executives in the key-markets with favorable reactions.

The band-members have always been open to influences, regardless of origin as well as the essence of the band´s sound. They list acts like My Chemical Romance, Linkin´ Park and the late Michael Jackson.

The band´s debut-single, “Set Yourself Free”, is mixed by Chris Sheldon (Foo Fighters, Skunk Anansie, Roger Waters, Jeff Beck), who also will mix the remaining tracks on the album. The single ”Set Yourself Free” recently made top 10 on the Swedish download charts after a TV appearance for 3.5 million viewers.

Cristoffer: I grew up in the archipelago outside of Stockholm. My primary school had a “cultural touch” to everything we did with a big focus on music and dance. In 3rd grade we started to get instrument lessons where i played the saxophone and clarinet. I got bored of playing brass and joined the local Music-school at 4th grade playing the guitar, and that, along with my parents vinyl collection, is what got me in to music.

Adam: I grew up in Järfälla outside of Stockholm and started playing classical piano at my local school when I was 7. I also sang in a boys choir at the time so I was very into classical music in my early years! When I was in my teens I wanted to be more diverse in my playing so I started to play more pop, rock and jazz but never lost hold of my classical schooling. Today I’m into all kinds of music and love to cross between different genres.

Charlie: I grew up outside of Stockholm. Me and my brother Felix have been playing together since we fist picked up our instruments, but there weren’t a lot of people who played music where I lived, so I used to try to teach my friends how to play bass and guitar. When I started going to music school in Stockholm (where I met Adam and Cris) I got to meet people with lots of different musical influences, and I stared listening to all kinds of music.

Felix: I grew up outside of Stockholm. There weren’t that many with musical interest where I lived so I had some hard time finding new musical influences and was kinda stuck in the punk and rock genre. Playing with Charlie have helped me discover and try some new music, but it wasn’t until I met Cris and Adam that I really started to try expand my musical sense.

What would we be surprised to find in your music collection?

Adam: Being a concert pianist, I’ve got a lot of jazz and classical records in my collection.

Cristoffer: I listen to a fair amount of SKA and Oi.

Charlie: During my last year of music school I did a project on Bluegrass, so there are some bluegrass records there.

Felix: I listen to a very big variety of music, so you’d probably be surprised by many of the songs I listen to.

Charlie & Felix – your family certainly possess the bloodlines for music, as your grandfather is none other than Benny Andersson of the renown band, ABBA. Do you have any great stories you can share with us growing up in such a musical family?

Charlie: When I think of my childhood, I don’t necessarily think of it as a musical one. I feel that since our parents are musicians, they know the importance of being supportive in what ever your kids feel is right, and the importance of letting your kids go their own way.  As a side note, my mother keeps stealing all of my favorite rock records. I still can´t find all of my “My Chemical Romance” albums.

Out of all your live performances so far, what has been your best memory? Worst?

Best memory is definitely our performance in Melodifestivalen (the swedish try outs for the Eurovision Song Contest 2014). With 10,000 people in the arena and 3 million viewers it was an amazing experience.

It’s not the worst gig that we’ve done, but it’s definitely the weirdest; A gig that we did a couple of years ago in a bowling alley. We played on a stage above the lanes with bowling balls rolling under us the whole time. Our guitar and bass pedal-boards lost power during the first songs and Felix almost fell backwards of the stage due to a non-existing safety rail.

What is your favorite song on your album and why?

Adam: Greatest Loser. It’s definitely one of the strongest songs on the album and it’s the perfect opening track. According to me, it’s the song that has evolved the most in the recording process.

Cristoffer: Best Of Me. It’s one of the songs that I have been most fond of since we started working on it. And with the string arrangement it really becomes kind of a symphony.

Charlie: Sometimes. I like how it really allows you to feel strong and weak at the same time.

Felix: Promises. I’ve always loved energetic song, and this is in my opinion the song with most energy. It’s also the song I enjoy most when playing live.

Adam: I can fold my ears.

Charlie: I never get stressed.

Cristoffer: I’ve got an outstanding sense of direction.

Be open minded, but never let people twist your songs into something that you feel isn´t you.

We haven’t been on the road properly yet, so another story will have to due.. We had a very interesting moment last summer during the shooting of our promotion video. The producer wanted to do everything in 50 frames which in reality meant that we had to do everything at double speed leading to some very interesting moments, particularly for Set Yourself Free and a ballad called Sometimes.

We are currently following all the leads from our showcase gigs in Los Angeles at Musexpo and Worldwide Radio Summit. This summer, we will be focusing on some more songwriting and promo for the singles that will be released before the album comes out.

Joe Sansome of British Band, These Reigning Days Chats About Playing for 80,000 people, His Love for The Wu-Tang Clan, Meeting His Bandmates In Handcuffs And More!